Health care facilities and systems continue to focus on ways to improve energy efficiency, reduce waste streams and boost recycling efforts as part of their daily business operations, according to two separate and recent reports. 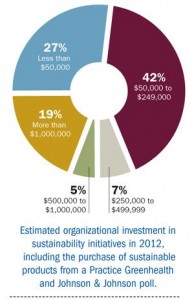 A survey conducted by Johnson & Johnson Co and Practice Greenhealth showed that 87 percent of responding hospitals incorporate sustainability into both the decision-making process and hospital operations when selecting environmentally preferable products and supplies.  In terms of spending, sustainability investment in the health care sector is on the upswing, with 90 percent of those surveyed stating that their hospital increased investments in sustainability in 2012 compared with the prior year.

Elsewhere, the Healthier Hospitals Initiative (HHI) recently released its “2012 Milestone Report” summarizing the Initiative’s first year of progress. An estimated 750 hospitals participate in the program.  Among the key achievements after one year of HHI’s operation:

Gary Cohen, founder of HHI, president and executive director of Health Care Without Harm and president of Practice Greenhealth, is encouraged by HHI’s first-year results and expects sustainability efforts to continue to expand.  “Our sense is that hospitals start sustainability in three areas that can save a lot of money,” Cohen says. “One is waste-reduction, two is energy-intensity reduction and energy-efficient strategies, and three is reprocessing medical devices. The third, especially, is going to grow in a big way.”