Healthy Hospitals Initiative Wraps Up, But Strategies Live On

Healthy Hospitals Initiative Wraps Up, But Strategies Live On

After achieving success in getting more hospitals involved in reducing their carbon footprint, the Healthy Hospitals Initiative will remain a Practice Greenhealth program.

The environmentally focused Healthy Hospitals Initiative finished with a bang, receiving data from 970 hospitals in its third and final year, a 52 percent increase from the previous year, and close to triple its first year participation.

“It shows a large segment of the health care sector can adopt sustainability measures and together we can have a huge impact on transforming practices,” said Jeff Brown, executive director of the supporting organization, Practice Greenhealth.

Some of the highlights of the initiative found in its 2014 Milestone Report concern areas that might not be obvious targets for sustainability, such as purchasing compound-free furnishings, an segment in which 21 of the reporting hospitals spent $12 million. That represented 58.7 percent of their total $21.3 million furnishing budget.

Successes also were reported in more well-known areas of sustainability. Participating hospitals reported they eliminated 73,600 metric tons of greenhouse gases through energy reduction, which is the same as taking 15,600 cars off the road annually. Since 2010, 457 hospitals diverted 446 thousand tons of materials from landfills, achieving a recycling rate of 24 percent.

…The participating hospitals were asked to take on efforts in one or more of six challenge areas: Engaged Leadership, Healthier Food, Leaner Energy, Less Waste, Safer Chemicals and Smarter Purchasing. 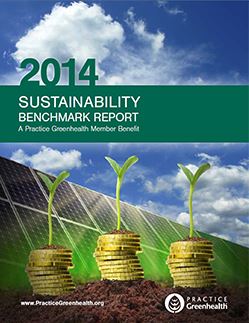